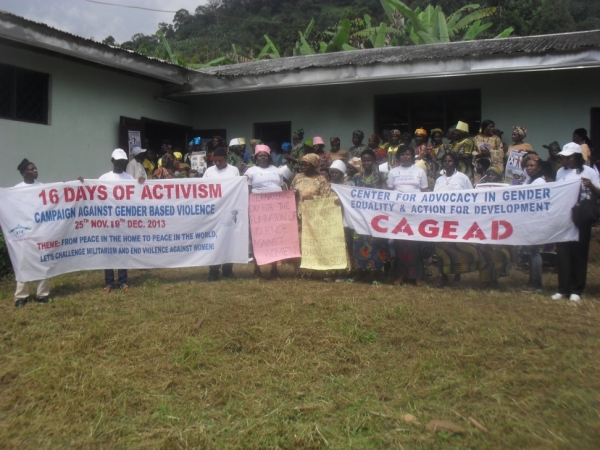 On May 7, 2014 at about 10:30am, two little boys of ages between 10 and 14 rushed barefoot into our school’s campus. They were hardly able to catch their breath as they reported that one of our female students was found raped and abandoned in a nearby forest on her way to school. When we arrived at the scene, we found out that the victim was not only raped, but her face mutilated and her ear cut off.

We rushed her to the hospital and immediately informed the mayor, school principal and the police. Our collaboration with Vital Voices Gender Based Violence Emergency Response Initiative strengthened us financially to provide psychosocial support for her. In collaboration with some members of the Bamenda Task Force on Trafficking in Persons, we were able to file a suit in the Mezam Court of First Instance against the perpetrator.

Since the victim had received training from us, she was able to denounce the rapist without fear of shame or cultural beliefs and stigmatization. Our collaboration with the victim and the traditional authorities and the Bamenda Task Force on Trafficking in Persons enabled a speedy arrest of the perpetrator. He was found guilty and given a non-negotiable eight years in prison with a fine of two million FRS CFA.

Although the hearing of this case took longer than expected because of bureaucracy, the outcome wass ground-breaking in the Bafut community. Young girls now feel free to participate actively in public because they know they are protected by law.

CAGEAD followed up with the victim while providing psychosocial support as she continues to rebuild her self-esteem, concentrates on her studies and passes the Ordinary level Certificate exams with 6 papers out of the 8. We understand that there is no way young girls can receive an education and actively and freely participate in public life when they suffer from gender-based violence. The magnitude of this problem is so great in the North West Region of Cameroon global attention is needed to scale up CAGEAD’s activities and increase the impact.

We remain committed to our education programs providing young girls with information they need in order for them to make informed decisions about themselves and their communities and providing psychosocial support to victims of gender-based violence. CAGEAD will stop at nothing to ensure that young girls unleash their full potential and effectively participate in public life in their communities.